Things will be winding up at the Museum in a few weeks, although, we still have an afternoon Kids' Camp scheduled for August 20th and a Hi Pie Friday for August 21st. Our guided tours will continue to run on into September, by appointment. So, we have lots of opportunities for you to meet our summer staff before the Clayton McLain Memorial Museum closes for the season! 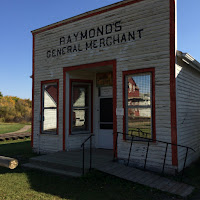 Our Museum Manager, this year, is Colleen, a three year resident of the Cut Knife area. She, and her family, live on an acreage which, she claims, “would qualify as a zoo!” Many may recognize Colleen from her work at the Cut Knife Elementary School as a Special Education Assistant. Her favourite exhibit, although it was a tough choice, was Raymond's General Store; she especially likes seeing the original items for many of the name brands we use today.

Most Interesting Museum Experience: Colleen actually had the nerve to participate in one of Fort Battleford's Ghost Walks! Led by the light of a single lantern, the tour winds its way through the fort's buildings while the guide recounts ghostly historic tales. Colleen admits it was “a whole new experience” and, she says, she “would do it, again.” 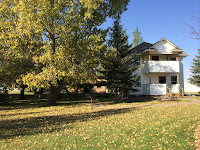 Jayden is a recent graduate of Cut Knife High School with plans to attend the Canadian Tourism College in Surrey, BC for her Adventure Tourism Diploma. She “loves being outdoors and working with people.” Jayden's favourite part of the CMMM is the Medical Building. She's had occasion to spend lots of time at hospitals over the years and finds it interesting how medical tools and procedures have changed over time.

Most Interesting Museum Experience: Jayden has also had a “spooky” musuem experience but this one was closer to home. She opened up the Duvall house one morning to find a footprint “clear as day” on the floor. Now, what's especially peculiar about that is, after Jayden had swept the floor and locked up the house for the night, no one had entered the building until Jayden unlocked the door the next morning - to find the footprint! 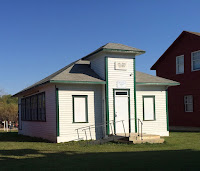 Blake is a resident of Cut Knife and a student at Cut Knife High School. He's working towards his Journeymen's in either carpentry or electrical. Blake, like Jayden, loves the outdoors; he spends time hunting, fishing, hiking and camping. The Gallivan School House is Blake's favourite exhibit; he finds it “fascinating how our education has changed in the past 50 years.”

Most Interesting Museum Experience: Blake visited the Royal Ontario Museum and was impressed by “the shear size of it” with many levels of exhibits from a variety of ancient civilizations as well as an animal exhibit “which was cool.” Unfortunately, it was also so large that he became separated from his group and spent two hours wandering, looking for them, until finally meeting up with them, again, in the front lobby. 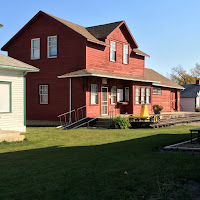 Aunica is a student at Cut Knife High School and a resident of the area. She lives with her family on an acreage on the Rockhaven road. Aunica's favourite exhibit is the Train Station, not only because it's filled with so many different kinds of artifacts but because she also likes the architecture of the building.

Most Interesting Museum Experience: Aunica used to live in Calgary and, once, she spent a whole week at an overnight immersion camp at Heritage Park Historical Village. The participants dressed in period costumes; they learned all about life at the turn of the 20th century and they lived it that way for 5 days!
at 8/16/2015 No comments:
Email ThisBlogThis!Share to TwitterShare to FacebookShare to Pinterest
Cut Knife, Saskatchewan, Canada Cut Knife, SK, Canada
Newer Posts Older Posts Home
Subscribe to: Posts (Atom)