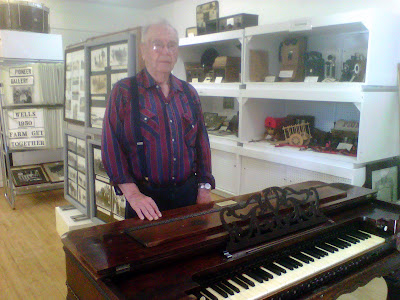 Russell Stewart is standing beside the melodeon that he donated to the museum this year.
It belonged to his grandmother, Lucinda Rebecca Cunningham Atton, 1854-1940. As a young woman in Kincardine, Ontario, she taught music on the melodeon. When Lucinda and her husband, William Matthew Atton, came west to homestead in March 1906, the melodeon came with them. Their son Fred rode in the train box car of settler's effects guarding his mother's treasured instrument.
Lucinda and the children spent the summer in a rented house in Battleford until their home was ready for them to move into on SW 14-44-20 in the Riding Hill District in September. Lucinda and William lived for the rest of their lives in this house. The Attons owned the land that bordered the lake that was named after them, Atton's Lake.
The melodeon was passed down to Lucinda's daughter, Annie, who gave it to Russell.
We are very honored to have this treasured musical instrument in our museum's collection.

at 8/26/2010
Email ThisBlogThis!Share to TwitterShare to FacebookShare to Pinterest