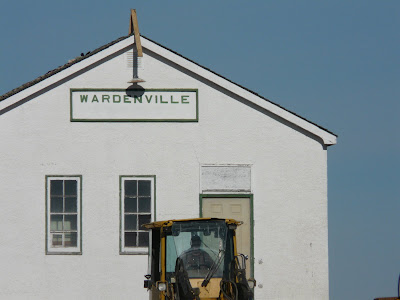 Wardenville School has sat in one place for over 50 years, but today it was moved to the Baldwinton district where it will take on a new job.
The building was a school from 1951 to 1958. The previous building was used from 1910 to 1951. In 1960 the community organized a community club to maintain the school and have a place to hold events. Over the years there have been Christmas concerts, wedding showers, birthday and anniversary parties, meetings, ball games, and snowmobile rallies held at Wardenville. The Wilbert 4-H Club used the building and grounds for many Achievement Days until several years ago.
The declining population and interest made the Community Club disband and sell the building to Bob Gregoire.
Another landmark is gone, leaving just memories. A sign will be erected to mark the site.
Many mice are now looking for a new home - or maybe they moved to Baldwinton too?

at 10/01/2010
Email ThisBlogThis!Share to TwitterShare to FacebookShare to Pinterest